A bronze sculpture by Mathurin Moreau 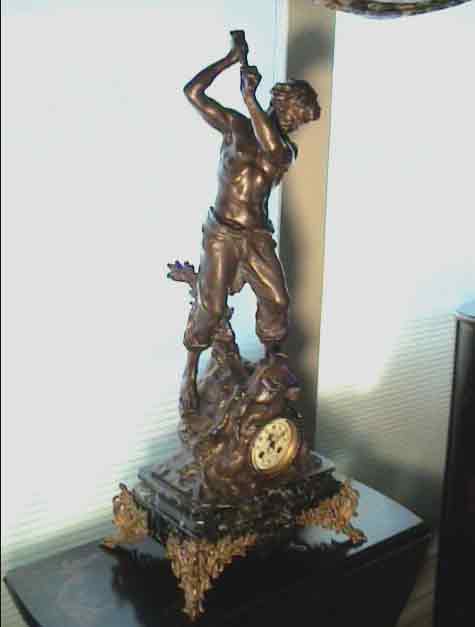 We bought this mantle clock and two candlebra set at an antique store in Denver in the late 1990s.

We've tried to research the sculpture with little success.

There must have been more castings.

We've placed this page on the Internet in hopes someone else researching this sculpture or this sculptor will find it and contact us. 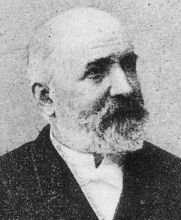 Auguste had two sons, Louis Auguste Mathurin Moreau (1855-1919) and Hippolyte Francois Moreau.
All of them were sculptors.


There were two named Hippolyte-Francois. Their listings on internet auction houses seem to get confused with one another's.

From 1878 Mathurin Moreau was mayor of the 19th arrondissement in Paris. The Civil Marriage, a painting by Henri Gervex that hangs in the Salle des Mariages of the Mairie of that arrondissement, shows Moreau officiating at his son's civil marriage ceremony, before a distinguished audience.

Here's a link to a page about the Moreau Family of sculptors.

The nameplate below the clock (photo below) says
Bûcheron
Par Math. Moreau (Hors-Concours)
(hors-concours means not done for a competition)

Inside the base, the clock is dated Paris 1900 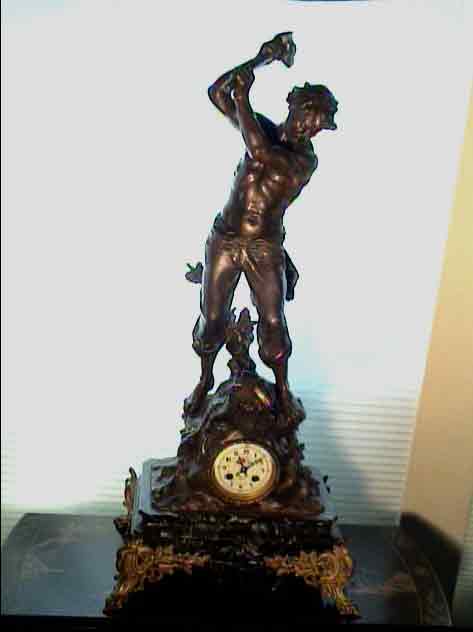 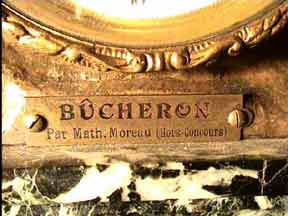 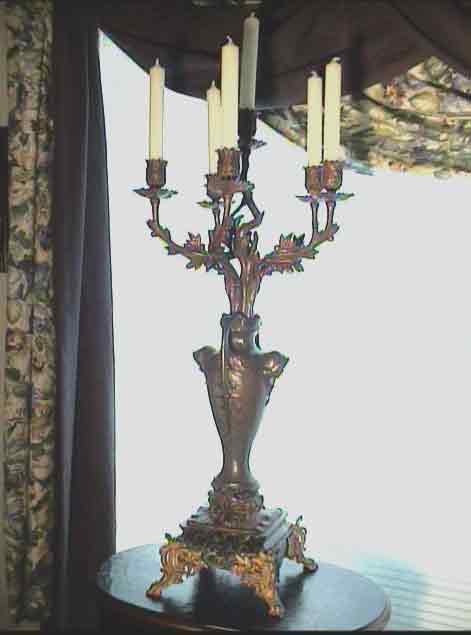 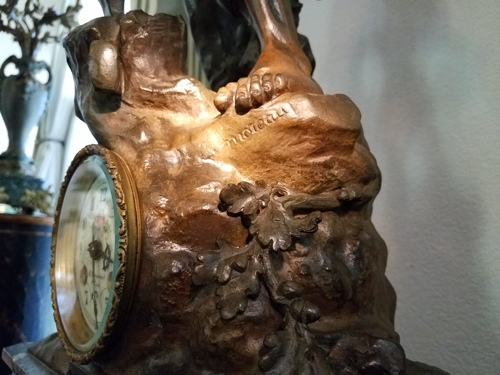 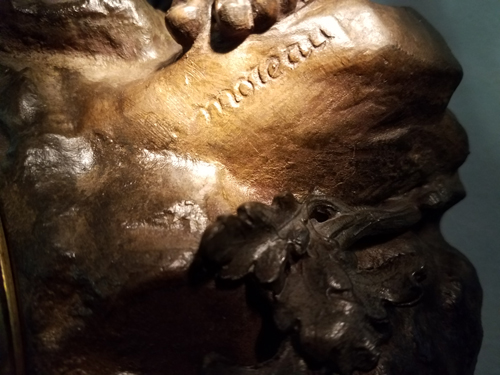 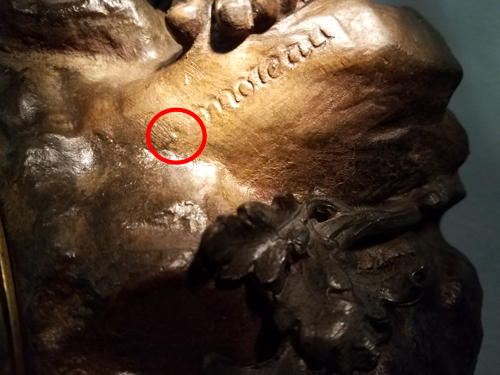 If you look closely, you can see the period in front of "Moreau" that is part of Mathurin's style of signing.
Math. Moreau
Apparently the abbreviated first name was lost in the process of placing the sculpture into the clock base.

The foundry mark: Fabrication Francaise Paris, made in Paris France. This was a foundry in Paris which poured French bronzes and iron work in the late 19th Century, early 20th Century. The circular foundry mark bares this name at the top, an image of a crucible set on flames in the centre, with the “Made in France” ringing the bottom of the circle, The “Made in France” in English on the foundry mark is due to the U.S trade law of 1891 that required all imports to be marked to indicate the country of origin. 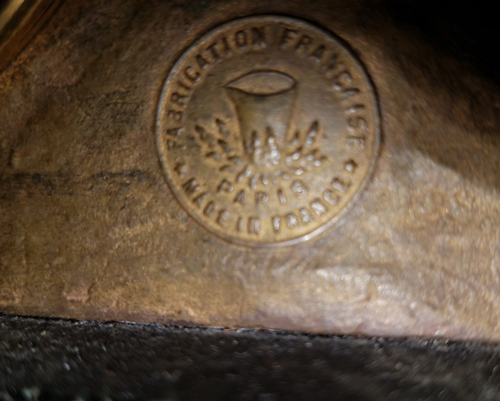 There is a crystal, a flat, beveled glass door, surrounded with an ornamental wreath.
On the clock face is painted a garland of flowers and the words E. Barrard. 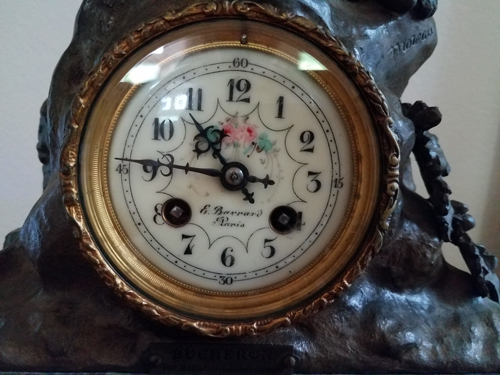 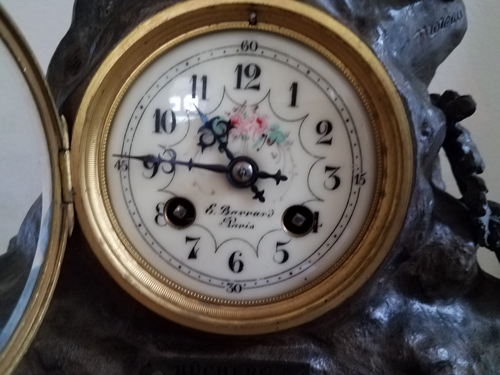 On the back the clock is labeled Barrard & Vignon Horlogerie,
Rue Commines 7, Paris. It's stamped with the serial number 6954. 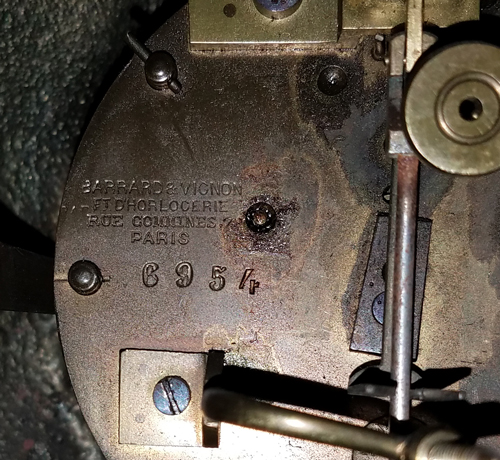 There's a date stamped on the back of the clock; it's difficult to find because it is behind the chime.
The clock is stamped Paris 1900. 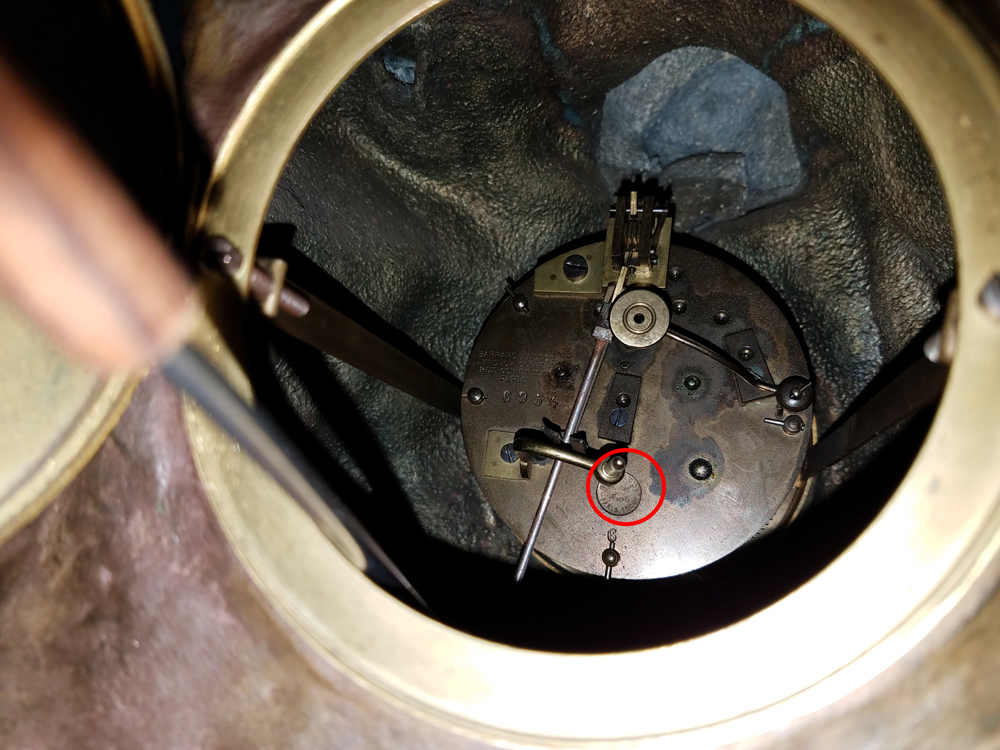 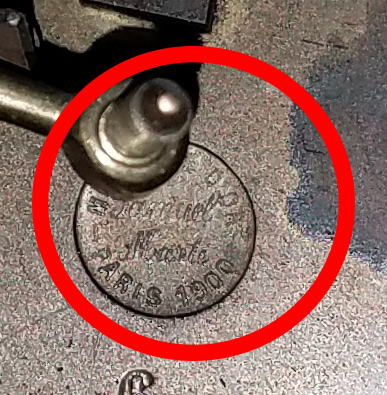 Our sculpture is slightly damaged. Bucheron's axhead has been broken off and glued back.
Both candlelabras have cracks in the arms that hold the candles.
Though the damage probably occurred in shipping to the U.S. in the 1990s,
we've fantasized a history for the clock
in which this damage occurred in Paris during one of the World Wars.
In the year 2000, as the clock chimed the turn of the millennium, we toasted Bucheron's hundredth birthday.

If you know anything about this sculpture, we'd certainly be interested in hearing. Email: tobyjohnso@aol.com

Here's a link to a site that shows many Mathurin Moreau sculptures and what they sold at at auction
youvalyou.com/Sculptures--auction-price-results-x-MOREAU-Mathurin-1822-1912-.aspx

This link is to a site called Tracadero that used to bring up a zinc casting
http://www.trocadero.com/alternatives/items/297461/en1.html
of the same statute (without the clock and candlelabras) at a dealer called Antiques by Alternatives.
Neither site brings up the listing anymore; so the statue must have sold. You can search Tracadero for Moreau and find other works by him or his son.
Here's what it says about this version


Zinc sculpture on verde green marble base 'Bucheron' (Woodcutter). Late 19th century, bears a small brass disc on the bottom back (France, Paris Fabrication seal) and a title disc on the front set into a laurel wreath. ('Hors Concourse', artist and title) . Early regule casting from the original mold, not a reproduction. Very good condition, sharp details, some loss of the original bronze patina. There is one small crack in the marble of the base, but this is stable and does not detract from the appearance or value. Well listed French artist, Mathurin Moreau (1822-1912). Sculpture and base dimensions: 73 cm high x 21 cm wide, 9 kgs (28.76 inches x 8.27 inches, 19.84 lbs) Will ship from France. Please email for more pictures, as only 4 are allowed here. 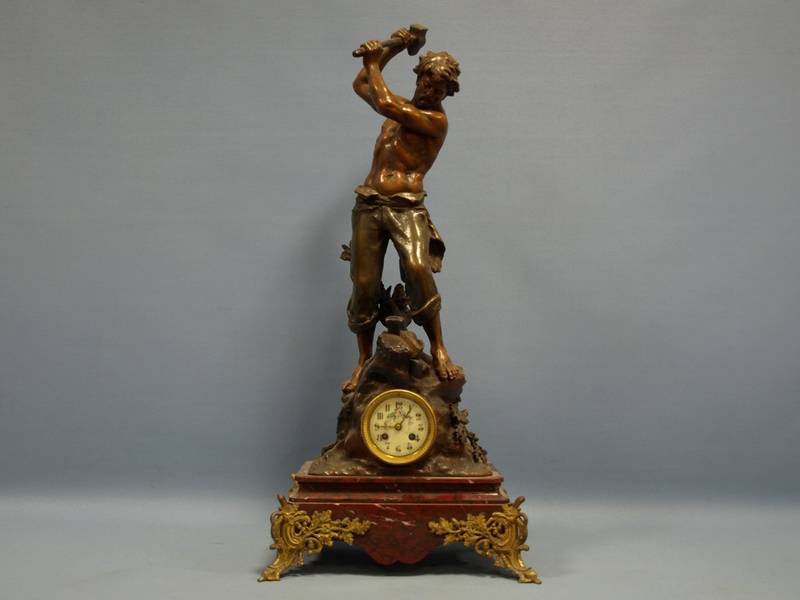 Here's another example of the staute, identical to the one pictured above but on a red marble base, rather than green. It was shown for sale estimated at a value of 200-300 euros. 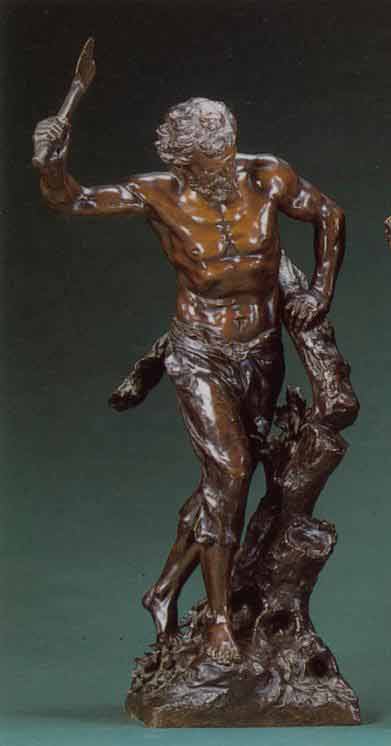 There is another version of the sculpture we found on the Internet showing the same barechested woodsman with ax, but in a somewhat different pose, chopping a tree trunk about 3 ft. high, rather than striking a wedge in a stump.

Here's the signature from that statue:
Note the period after Math -- circled in red.

I have also been contacted by somebody who reported having a version of the statue with his cotton shirt still on. In the shirtless sculptures, the shirt is tucked into his waistband at the back. It can be seen in this version pretty well. They did not send me a photograph of Bucheron wearing a shirt.


Here's a bio of Mathurin Moreau

(b Dijon, 18 Nov 1822; d Paris, 14 Feb 1912). French sculptor and entrepreneur. His father, Jean-Baptiste Moreau (1797–1855), a sculptor in Dijon, was best known for his restoration of the medieval tombs of the Dukes of Burgundy, which had been damaged during the French Revolution. In 1841 Mathurin entered the Ecole des Beaux-Arts, Paris, where he trained under Etienne-Jules Ramey and Augustin-Alexandre Dumont. He made his Salon début in 1848 with Elegy (plaster, Dijon, Mus. B.-A.). In 1852 his Flower Fairy , exhibited at the Salon in plaster, was commissioned by the State in bronze (Dijon, Mus. B.-A.).

At the 1861 Salon, his marble Spinner was also bought by the State, for the Musée du Luxembourg, Paris (version, Dijon. Mus. B.-A.). Poetic and uncontentious works of this kind continued to earn Moreau medals and prizes at subsequent Salons and international exhibitions. Among his public works, he contributed decorative sculpture to the new Opéra and to the rebuilt Hôtel de Ville in Paris, and also produced some commemorative statues, such as that in Dijon to Sadi Carnot , President of the French Republic (marble and bronze, 1899; Dijon, Place de la République), which he executed in collaboration with Paul Gasq (b 1860; fl 1881–1909).

However, it was probably the extent of his entrepreneurial activities that won for Moreau an influential position in public life. Having provided many sculpture models for commercial exploitation by the Val d’Osne foundry, he became one of the administrators of the Société du Val d’Osne. Together with his pupil and namesake, Auguste Moreau (1834–1917), he continued, well into the 20th century, to supply models for the manufacture of decorative bronze statuettes that were wholly untouched by more avant-garde endeavours.

From 1878 Moreau was mayor of the 19th arrondissement in Paris. The Civil Marriage , a painting by Henri Gervex that hangs in the Salle des Mariages of the Mairie of that arrondissement, shows Moreau officiating at his son’s civil marriage ceremony, before a distinguished audience. 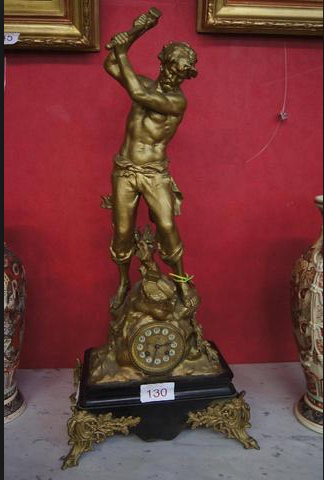 This version appears on a page for an auction house. The link doesn't lead to the image and there seems to be no information on the site interencheres.com

The surface looks refinished (or maybe even painted). There's no patina.

The clock face is different from ours. 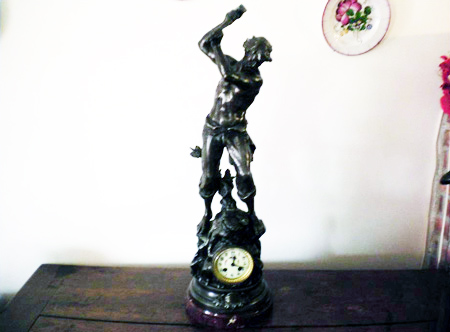 This version of the statue on a different base was put on internet auction from a shop called cedmica.com on the European auction site delcampe.net. The last bid placed was $482 (340 euro) when the auction was closed, apparently without selling the statue.


This appears to have the same clockface as ours.

The casting seems to be like the zinc version above on a small round "rock" rather than the wide "hilltop."

Here's a statue of Bucheron, sent by a man in Legnano, Italy, just outside Milan. It appears to be bronze, on the "rock" base, with a more modern-looking clock with only one winding keyhole (so maybe no chime). It's got a clock but has a base similar to the modern copy shown below, though that one does not have a clock. The owner writes that his grandfather had bought it in an auction in Switzerland in the 1950s during a symposium. He'd like to sell it. 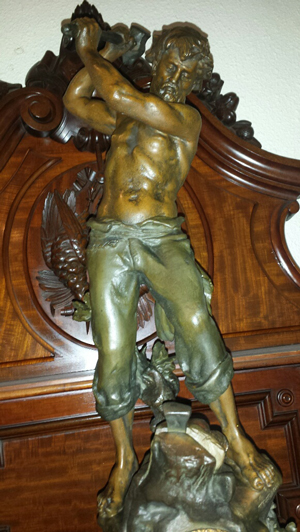 Here's a version of Bucheron that belongs to a fellow in Holland.

It's identical, but the pants are green. 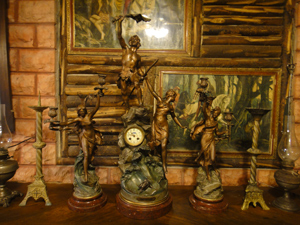 Here's another Moreau statue that a viewer sent. It is titled Le Sauvitage

In 2017, I was contacted by a couple in the Republic South Africa who have a copy, like the one above on the red marble base.
They reported that they found it for sale in the slums of Algiers.
What history these clocks must have seen? 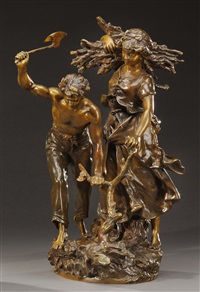 Mathurin's brother Hippolyte apparently also did a sculpture of Le Bucheron with his sister or wife.
It is titled "Couple de Jeunes Bucherons." It is on an auction site dated Febrary 2016.
One person who has corresponded with me suggested that this statue of the couple demonstrates that Hippolyte had scultped Le Bucheron rather than Mathurin. The photo of this sculpture of the couple doesn't show a signature.
Our statue of Bucheron clearly shows enough of the signature to see the period after the abbreviation of Mathurin's name: "Math."

This photo was posted to an Antiques site on reddit.com in October 2020, inquiring if anybody knew anything about it.

It appears either very dusty or, perhaps, to have been spraypainted green to simulate patina. The marble plinth the statue stands on shouldn't have been painted.

A website called catwiki shows what is identified as
"D'apres Mathurin Moreau": apparently a modern copy.

BACK to Toby's home page