My Friend and Teacher,
Kimberley McKell 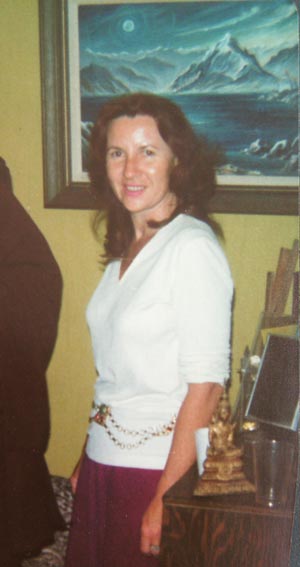 Dr. Kimberley McKell was the popular--and stimulatingly avant garde--professor at the California Institute of Asian Studies in 1970 when I first enrolled at the Institute. She taught classes in Psychology and Myth.

Dr. McKell is a practicing psychotherapist. Her focus and expertise with in Jungian and Transpersonal Psychology. Her interest was guiding her clients' mental, emotional, and--most importantly--spiritual health and development. Even when I knew her long ago, she was a wise woman and intuitive guide. Now in the 2020s, she is still practicing, and still accepting new clients, primarily by telephone.

If you are interested in seeing her professionally, please send me an email--with your phone number and a brief self-introduction. I will pass the information along to her. OR if you find this page because you're searching on her name, please let me know and I will connect you or at least just tell her that you were wondering about her. She would love to know.

I became her student--and life-long friend--in the Fall semester 1970. Kim was a delightful woman, only a few years older than me (I was 25), with a wry and wonderfully ribald sense of humor. In her very delicate way, she loved to shock people with her honesty and directness. She was an acute judge of character--and the most amazing thing about her playful and shocking jokes was that she was almost always right. She was very widely educated and clearly brilliant, though usually as a maverick, original thinker and contrarian. She comes from a long line of Philadelphians (the first person in the family plot was buried in 1799, a Burke related to Edmund Burke, the Irish orator and political philosopher). The family name was Raquelle.

In 1952, she graduated of the Univ of Southern California. There she had met Alan Watts while he was giving a seminar.

After college, she attended the Art Students' League in New York City and studied portrait painting.

In the mid-50s, she moved to San Francisco looking for Alan Watts. Thus she connected with Haridas Chaudhuri and the California Institute.

She changed her name as a sign of personal independence. She was certainly a counter-culturalist, though in keeping with her contrarian, heterodoxical persona, she called herself a conservative and registered as a Republican.

- - -
Kim was writing a magnum opus dissertation on psychological themes in Tantric Tradition in Hinduism and Buddhism. I proofread the final draft. It was titled "The Psycho, Physical and Spiritual Aspects of the First Two Chakras." The hypothesis was that the various movements and trends of thought in the development of modern psychology could all be correlated with the mythology and imagery of the seven chakras in Tantric spiritual anatomy. Kim's analysis was really quite astute. There's a way in which it's obvious, once you see it. But making these connections was a original insight. And it certainly proved helpful to me in conceptualizing the Tantric system. What she was writing about in the 60s was very similar to how Ken Wilber would conceptualize the continuum of consciousness a decade later.
Very simply, this tradition identifies 7 major spiritual centers that characterize human personality and associates these levels of consciousness with locations in the body. From bottom to top, they are:


Kim's insight was that these also correlate with the history of psychology and modern psychiatry. First chakra with Freud, oral/anal//genital stages of ego formation, survial anxiety, hysterical symptoms Second chakra with Reich, orgasm, bioenergetics, relaxation of muscle tension involved in personality patterns Third chakra with Adler,  the will to power, inferiority complex, compensatory behavior The higher chakras then with Jung, individuation, dreams, myth, religion, spirituality, the collective unconscious. In Jungian thought the evolution of personality moves through the stages of the heart, awareness of the shadow, being able to see clearly without neurotic "blinders," and transcendence of self -- the issues of the 4th, 5th, 6th, and 7th chakras. Later psychologists would break from this original "psychoanalytic" approach created by Sigmund Freud. The issues of the higher chakras were dealt with by Rogers (and the notion of "unconditional positive regard," a 4th chakra experience), Albert Ellis (and rational-emotive therapy, a 5th & 6th chakra approach), and then in the 1960s, when Dr. McKell was writing about this, the development of so-called Transpersonal Psychology (which understood psychological maturity in a spiritual, not a mental illness context, clearly a 7th chakra experience.) 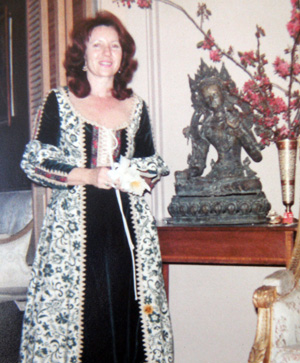 As a young woman, Kimberley had lived in Haiti and could speak very authoritatively about Voudun-- "Voo Doo," the ecstatic trance/spirit possession religion of the Caribbean. She was amazingly fluent in the world's religious traditions, a great advertisement for her own intellectual and professional education. 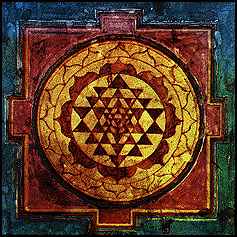 She was a student originally at the American Academy of Asian Studies; Alan Watts, the great interpreter of Zen Buddhism to America in the 1950s was Dean and President of the school.  Kim stayed friends with Alan Watts till his death in 1973. 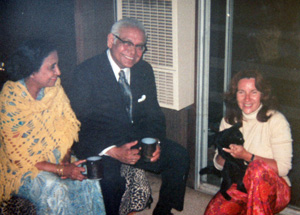 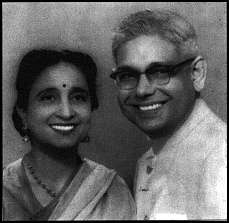 When the American Academy went into financial crisis in the early 60s after Watts left the administration and faculty and then lost its accreditation through the University of the Pacific, a group of students and teachers at the Academy joined with Haridas Chaudhuri to create the California Institute of Asian Studies in 1968. Chaudhuri was a disciple of the renown Indian philosopher and modernizer of Hindu Vedanta thought Sri Aurobindo. Haridas and his wife Bina came to America as apostles of Aurobindo's idea that Hindu tradition and Western philosophy could be unified in a great synthesis he called "Integral Philosophy." (The on-going conversation at the C.I.A.S. during my own years there was "what does 'integral' really mean?" In 1980, the Institute changed its name to the current title: California Institute of Integral Studies.)

Kim followed Chaudhuri to CIAS. She did her Masters thesis on "The Trinity Goddess in Ancient Britain, Egypt and India"; she was a real pioneer in Goddess study. She then joined the faculty. And at the time I arrived in fall of 1970 was one of the beloved and most provocative instructors.

Here are photos of her with the Tibetan Buddhist abbess, Ani Pagmo,
who had initiated her into Tibetan Buddhism, giving her as an initiate name,
that of the "Goddess of Compassion," Tara. 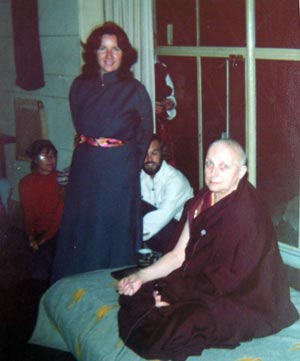 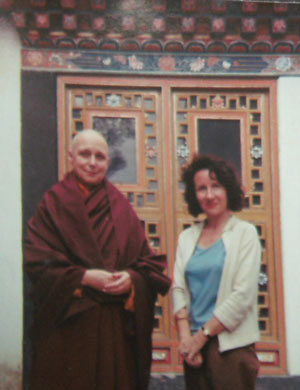 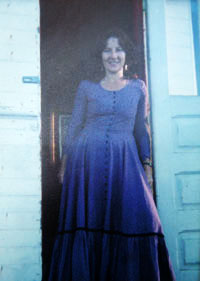 
Along with another CIAS student, she had traveled to India; she and Steve Krolik explored not only the geography but the consciousness and the experience of India. And came home with lots of souvenirs.

Kim was an accomplished oil painter. Many of her paintings were of sights--and sites--she'd seen in India. She created amazing canvases, some of them reminiscent of Marc Chagal's style: mythological images floating in space, floating in consciousness, as it were. Her home was literally overflowing with canvases. And with holy objects from India. 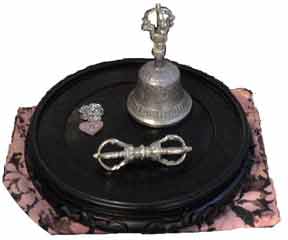 It was from Kim that I learned of the Tibetan meditation implements, the vajra sceptre and vajra bell that Tibetan Buddhist monks hold in their hands during meditation (my own set is pictured here), and of the image of the two vajras crossed that, after my first editor at William Morrow chose it for the cover of my book The Myth of the Great Secret, became a sort of personal spiritual logo for me.

Kim painted a set of Tarot cards of the Major Arcana. Photographs of these cards, courtesy of Stan V. McDaniels, appear on the next page Kim McKell's Tarot paintings. 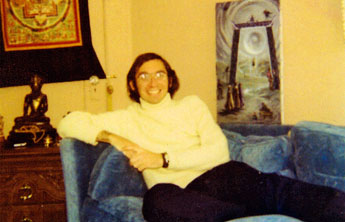 Here's a photo of me stretched out on Kim's couch during one of the classes she taught from her home, just off Holly Park Circle in Bernal Heights. Behind me is one of her paintings. This depicts characters from the Tarot as archetypes of the unconscious leading the way through a gate into the Collective Unconscious.


From Kim McKell and her classes in World Mythology, Jungian thought and Tantra, I learned a whole series of lessons that changed my life--all for the better, I believe. Among those lessons are:


• a sex-positive attitude, based in the tantric spiritual traditions of India

• techniques for visualizing and conceptualizing the chakras in meditation practice

• skepticism about spiritual systems that use numbers. Except for the seven chakras, Kim did not like system that assigned rigid hierarchies -- which she always said were revealed in the numbers.

• the vision of the continuum of consciousness

• the notion of "The Matriarchy," the semi-mythological idea that there was once a "Golden Age" on Earth when women ran the world and sex was valued positively

• and the understanding that in our time there has been a resurgence of "faith" in the Great Mother archetype. Modern feminism grows out of this newly recovered respect for women and women's power.


After I had completed course work for my Masters in comparative religion at the Institute, I began working for Kim as a kind of personal assistant, janitor, and hippie carpenter. Kim lived in a neat house just off Holly Park Circle in the Outer Mission District. I worked for a year or so helping her convert the unfinished basement to an apartment. In the mornings, I'd work in the basement (singing the "Dies Irae," she reminds me), at lunch we'd go to the hardware store together for supplies, and in the afternoons I'd proofread her dissertation or consult on psychotherapy clients. I only half-joking called myself her General Factotum.

What a grand experience! 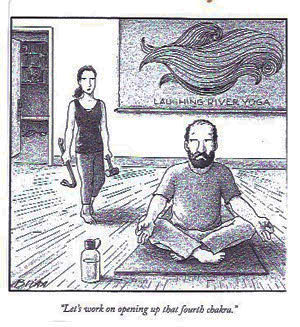 Here's a cute cartoon I came across that shows a yoga teacher coming with hammer and crowbar, saying "Let's work on opening up that fourth chakra." The fourth chakra controls the ability to experience love and affection. In many ways, Kim McKell was the yoga teacher, yogini/dakini who taught me how to open my fourth chakra--and, in a very real way, the tools of the carpenter were part of the lesson.

(If you are interested in seeing her professionally, please send me an email--with your phone number and a brief self-introduction. I will pass the information along to her.
toby@tobyjohnson.com ) 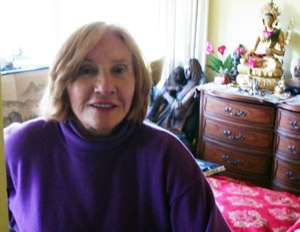 Kim now lives part of the year in Washington, D.C. and part in Northern California. She still occasionally teaches seminars in mythology and Jungian thought.


Kimberley McKell, current day, wise woman wearing purple!
(There must be a red hat somewhere.)
--with another Tara in the background 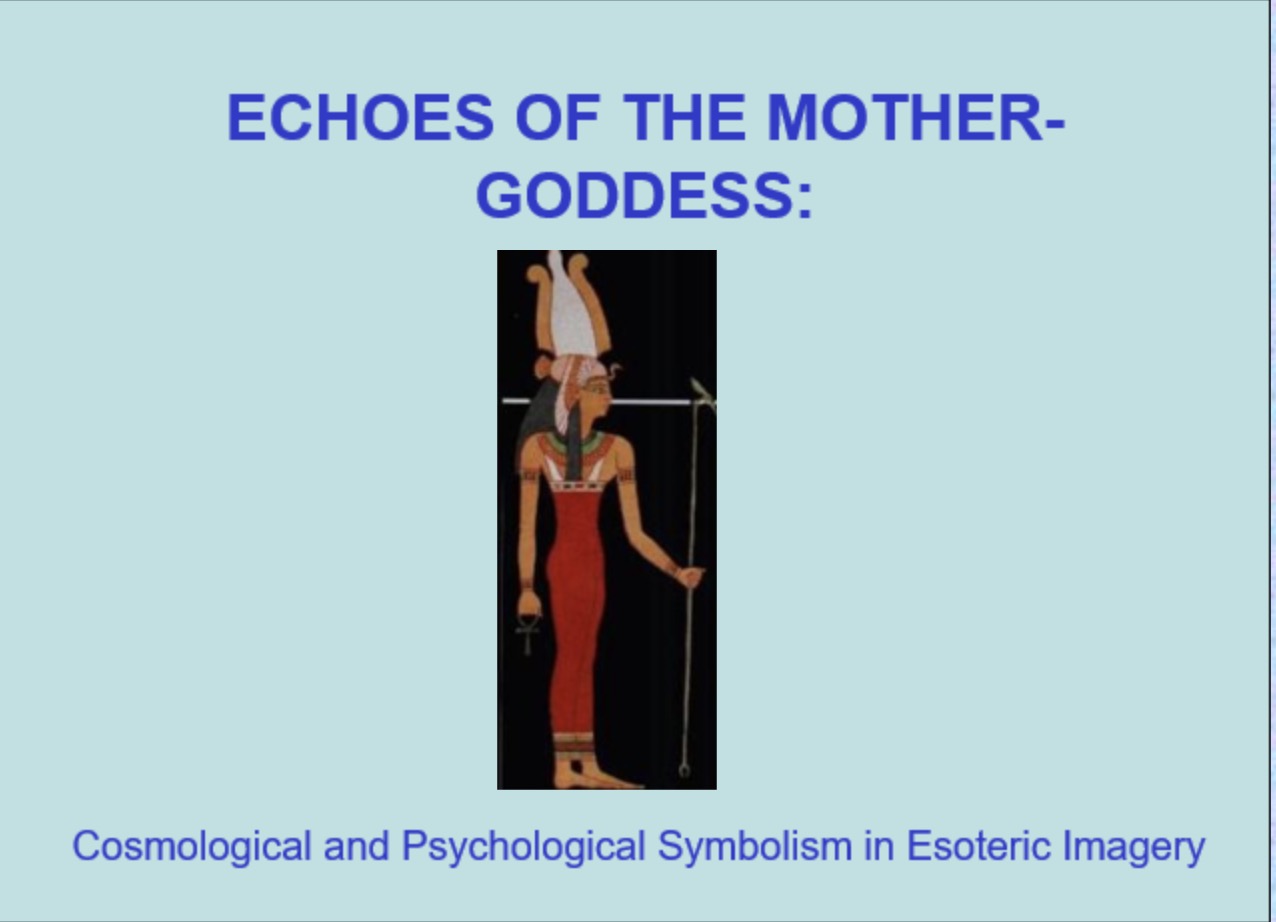 Stan V. McDaniel was a fellow teacher at Sonoma State College with Kimberley McKell (before she moved to San Francisco to study at the American Academy of Asian Studies, under Alan Watts). Professor McDaniel taught a class on The Philosophy of Jung. He has shared a Powerpoint Presentation he used for that class titled "Echoes of the Mother Goddess" which he said was highly influenced by his friendship with Dr McKell. The slide show explains many of Jung's ideas about symbolism, especially in alchemical literature and iconography.

Here's a link to Stan McDaniel's Echoes of the Mother Goddess

Toby Johnson, PhD is author of nine books: three non-fiction books that apply the wisdom of his teacher and "wise old man," Joseph Campbell to modern-day social and religious problems, four gay genre novels that dramatize spiritual issues at the heart of gay identity, and two books on gay men's spiritualities and the mystical experience of homosexuality and editor of a collection of "myths" of gay men's consciousness.

Johnson's book GAY SPIRITUALITY: The Role of Gay Identity in the Transformation of Human Consciousness won a Lambda Literary Award in 2000.

His  GAY PERSPECTIVE: Things Our [Homo]sexuality Tells Us about the Nature of God and the Universe was nominated for a Lammy in 2003. They remain in print.


FINDING YOUR OWN TRUE MYTH: What I Learned from Joseph Campbell: The Myth of the Great Secret III tells the story of Johnson's learning the real nature of religion and myth and discovering the spiritual qualities of gay male consciousness.

BACK to Toby's home page